In his installation works, Çağrı focuses on autonomous systems and interactivity with participants. The central theme that recurs almost in all his pieces is the surprise and shared control of humans and machines. His solo and collaborative works include:

a physical-virtual installation explores the concept of entrainment, the process in which two interacting systems assume the same period. Through distance-controlling three Dr Squiggles robots, the online audience can interact with six self-playing guitars. The installation is physically located in the fourMs Lab at the University of Oslo, Norway. Users watch an online video stream of the installation with binaural audio and interact with the robots (and indirectly with the guitars) through a web interface. Guitars hanging from ceiling Six self-playing guitars hanging in the ceiling, with three Dr Squiggles robots on the floor.

an installation that explores expressive bodily control of a collective of rhythmic robots. Visitors are invited to wear muscle-sensors on their arms and perform ‘air-guitar’-like gestures: strumming, moving their fretting arm and fingers, and tapping their foot. The robots each independently generate some rhythms. They synchronize with each other and with the human performer in a way inspired by biological rhythms. Although each robot is fully autonomous, the overall music played by the ensemble is influenced by metaphors associated with the gestures of the human performer. 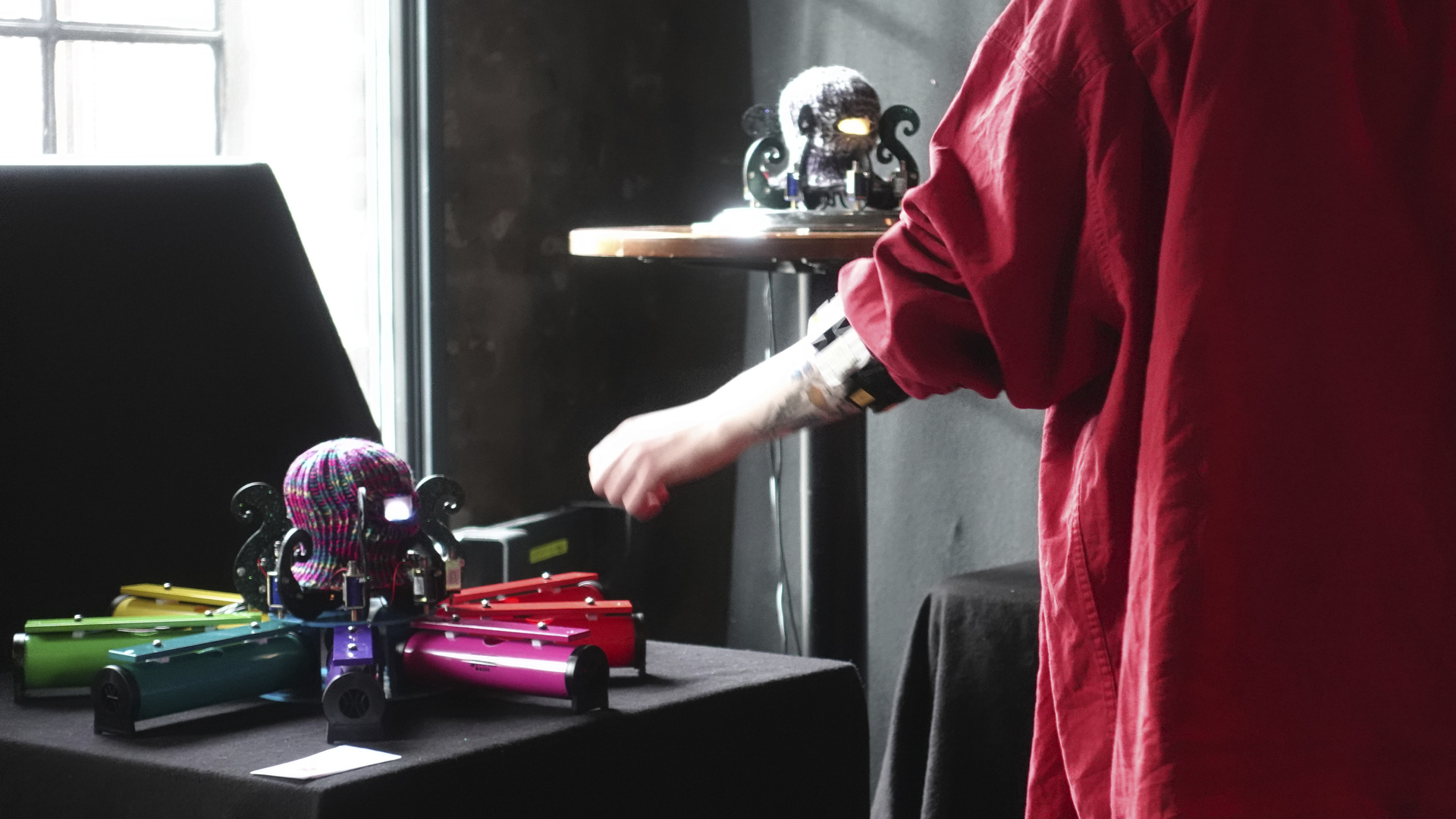 an interactive art installation at the Life science light event in the Botanical Garden. Self-playing guitars that entrain each other and interact with people. In this installation, we explore how six self-playing guitars can entrain each other. They will revert to playing a common pulse when they are left alone. As soon as they sense people in their surroundings, they will start entraining to other pulses. The result is a fascinating exploration of a basic physical and cognitive concept and the musically exciting patterns on the border between order and chaos.

an interactive sound installation is diffused through 4 rotating speakers, one plate transducer hanging from the ceiling, and a fixed 2+1 sound system. The amount of sunlight adjusts speaker rotations via four light-dependent resistors placed outdoor towards four cardinal directions. Each speaker starts to rotate by the dawn and constantly alters its speed throughout the dusk. The sound material is recorded on the board of Greenpeace's reputed ship, Rainbow Warrior, where the shipboard and additional materials such as cymbals, plates, and dc motors are utilized for sonic variety. Independently rotating speakers in different heights generates a dynamic acousmonium experience dependent on the daylight.

a soundscape composition about a decedent's last journey during the funeral. Embowered field recordings took place respectively in the bathing cubicle, in the mosque during the prayer, and inside the actual coffin throughout its journey from mosque till burial.

a spontaneous composition based on the influence of the rhizome, a philosophical concept developed by Gilles Deleuze and Félix Guattari.

a performance installation consisting of a modular synthesizer, guitars, computer, a drumset, and spontaneous happenings related to the context of the exhibition.